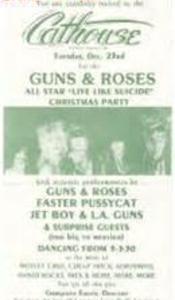 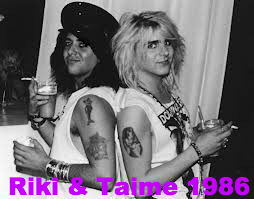 Ok we can't remember much from that glorious time but until we piece recollection's together here is an article we stole from the internet...So it must be true

Back in 1986, years before he was the infamous host of MTV’s Headbanger’s Ball, Riki Rachtman transformed a rundown Los Angeles disco into a one night-a-week dance club that would play nothing but rock music. Why? To have a place he and his friends could hang out, get free drinks and meet strippers. Riki teamed up with Taime Downe, the singer of the rock band FASTER PUSSYCAT, little did they know it would become, not only a part of rock history, but a music and fashion culture that defined The Los Angeles rock scene.

Burlesque videos graced the walls. Gorgeous women took over the dance floor and a plethora of rock legends like MÖTLEY CRÜE, AEROSMITH, MOTORHEAD began to make themselves Cathouse regulars. No cameras were allowed, making it safe for every A-lister because they knew no one would bother them.

DJ, Joseph Brooks, supplied the music through vinyl. “I always thought of the Cathouse as a rock dance club. That way if there was a live band it would be one that I approved and it would be a special occasion,” boasts Riki. The very first live performance was an acoustic set by  Guns N’ Roses. Guns n Roses made the Cathouse their home – they even played live at the 700-person capacity club one night prior to performing in front of 150,000 people at the Los Angeles Coliseum. Riki continues, “I started letting  a few bands play but usually it was not announced who would perform.”

Once after a friend begged him continuously to get his buddies band in, he caved and let a few guys called THE BLACK CROWES take the stage. The club steadily grew into a success and one that would lead L.A.’s rock elite to many nights of loud music, wicked hangovers,  and one-night stands . Soon everybody wanted to play the Cathouse. Remember when Axl Rose chased DAVID BOWIE out onto the street? It happened at the Cathouse.

The Cathouse became the club in Los Angeles with over-capacity crowds every Tuesday night. Celebrities began to flock to the Cathouse. Fashion moguls scoped for the latest trends. Newsweek wrote about it. Penelope Spheeris’s documentary The Metal Years featured the Cathouse. It was where you’d find Christina Applegate working the coat-check when she wasn’t taping Married With Children. It was the hot club in town where bands like PEARL JAM, ALICE IN CHAINS, STONE TEMPLE PILOTS, and WHITE ZOMBIE got their start. Yet bands that already made it wanted to at the Cathouse too — MOTORHEAD, ALICE COOPER, DANZIG, MEGADETH, to name a few. Metal, punk, grunge – all genres left footprints that would continue to inspire generations of musicians. And the best part of all is Riki never intended for it to be anything more than a place to pick up girls.